How to Stop Overthinking Everything

As a product lead at a major technology company, Terence’s job is to make decisions. How should the team prioritize features to develop? Who should be staffed on projects? When should products launch? Hundreds of choices drive the vision, strategy, and direction for each product Terence oversees.

While Terence loved his job, making so many decisions caused him a lot of stress. He would waste hours in unproductive mental loops — analyzing variables to make the “right” choices. He would worry about the future and imagine all the ways a launch could go wrong. Then, he would beat himself up for squandering valuable time and energy deliberating instead of taking action. In other words, his thoughtfulness, which was typically a strength, often led him to overthink situations. 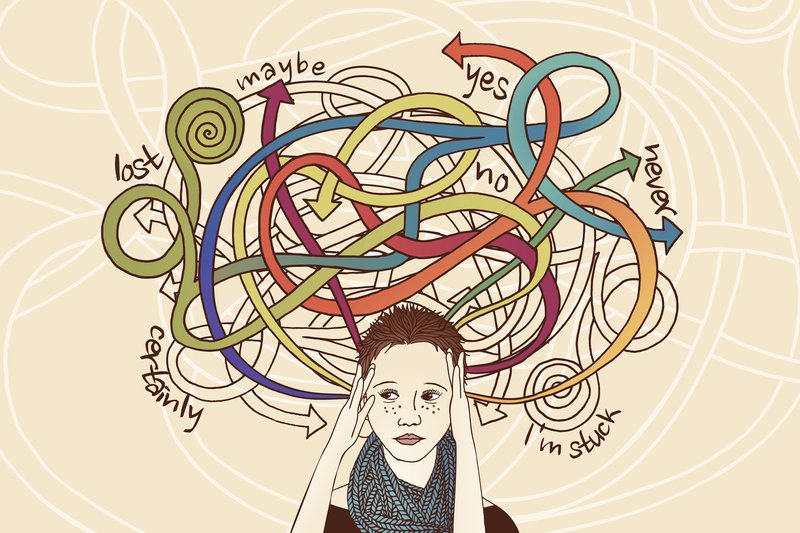 Terence is what I like to call a sensitive striver — a high-achiever who processes the world more deeply than others. Studies show that sensitive people have more active brain circuitry and neurochemicals in areas related to mental processing. This means their minds not only take in more information, but also process that information in a more complex way. Sensitive strivers like Terence are often applauded for the way they explore angles and nuance. But at the same time, they are also more susceptible to stress and overwhelm.

Deliberation is an admirable and essential leadership quality that undoubtedly produces better outcomes. But for Terence and others like him, there comes a point in decision making where helpful contemplation turns into overthinking. If you can relate, here are five ways to stop the cycle of thinking too much and drive towards better, faster decisions.

Perfectionism is one of the biggest blockers to swift, effective decision-making because it operates on faulty all-or-nothing thinking. For example, perfectionism can lead you to believe that if you don’t make the “correct” choice (as if there is only one right option), then you are a failure. Or that you must know everything, anticipate every eventuality, and have a thorough plan in place before making a move. Trying to weigh every possible outcome and consideration is paralyzing.

Which decision will have the biggest positive impact on my top priorities? Of all the possible people I could please or displease, which one or two people do I least want to disappoint? What is one thing I could do today that would bring me closer to my goal? Based on what I know and the information I have at this moment, what’s the best next step?

After all, it’s much easier to wrap your head around and take action towards a single next step rather than trying to project months or years into the future.

Some decisions are worth mulling over, while others are not. Before you make a call, write down what goals, priorities, or people in your life will be impacted. This will help you differentiate between what’s meaningful and what’s not worth obsessing over.

Likewise, if you’re worried about the prospect of a decision bombing, try the 10/10/10 test. When the prospect of falling flat on your face seizes you, think about how you’ll feel about the decision 10 weeks, 10 months, or 10 years from now? It’s likely that the choice will be inconsequential or that you won’t even remember it was a big deal. Your answers can help you put things in perspective and rally the motivation you need to take action.

Leverage the underestimated power of intuition

Intuition works like a mental pattern matching game. The brain considers a situation, quickly assesses all your experiences, and then makes the best decision given the context. This automatic process is faster than rational thought, which means intuition is a necessary decision-making tool when time is short and traditional data is not available. In fact, research shows that pairing intuition with analytical thinking helps you make better, faster, and more accurate decisions and gives you more confidence in your choices than relying on intellect alone. In one study, car buyers who used only careful analysis were ultimately happy with their purchases about a quarter of the time. Meanwhile, those who made intuitive purchases were happy 60 percent of the time. That’s because relying on rapid cognition, or thin-slicing, allows the brain to make wise decisions without overthinking.

Terence, the product lead I mentioned earlier, was so intrigued by the idea of making decisions from his gut that he planned a “Day of Disinhibition” during which he followed his own intuition about everything he said and did for twenty-four hours. The result? Going with his gut gave him the courage to stop censoring himself and make tough calls, even when he knew it might upset some stakeholders. “It wasn’t just what I got done, but how I got it done, how quickly, and how I felt about it,” he later told me, “It put me in the best frame of mind to deal with whatever is in front of me,” he said. Try the “Day of Disinhibition” experiment for yourself, or simply set aside a few minutes today and list three to five times you trusted your gut in and whether the outcome was favorable.

Limit the drain of decision fatigue

You make hundreds of decisions a day — from what to eat for breakfast to how to respond to an email — and each depletes your mental and emotional resources. You’re more likely to overthink when you’re drained, so the more you can eliminate minor decisions, the more energy you’ll have for ones that really matter.

Create routines and rituals to conserve your brainpower, like a weekly meal plan or capsule wardrobe. Similarly, look for opportunities to eliminate certain decisions altogether, such as by instituting best practices and standardized protocols, delegating, or removing yourself from meetings.

You may be familiar with Parkinson’s Law, which states that work expands to the time we allow it. Put simply, if you give yourself one month to create a presentation, it will take you one full month to finish it. But if you only had a week, you’d finish the same presentation in a shorter time.

I’ve observed a similar principle among sensitive strivers — that overthinking expands to the time we allow it. In other words, if you give yourself one week to worry about something that is actually a one-hour task, you will waste an inordinate amount of time and energy.

You can curb this tendency by creating accountability through creative constraints. For example, determine a date or time by which you’ll make a choice. Put it in your calendar, set a reminder on your phone, or even contact the person who is waiting for your decision and let them know when they can expect to hear from you. A favorite practice of my clients is “worry time,” which involves earmarking a short period of the day to constructively problem solve.

Above all, remember that your mental depth gives you a major competitive advantage. Once you learn to keep overthinking in check, you’ll be able to harness your sensitivity for the superpower that it can be.

Melody Wilding, LMSW is an executive coach and author of Trust Yourself: Stop Overthinking and Channel Your Emotions for Success at Work.